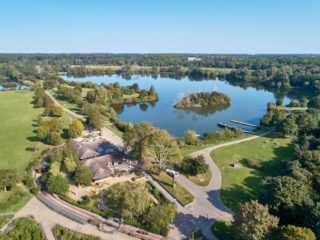 It’s a nice lakeside area, but it has paved as well as rough paths, so is good for walking, even when it is wet and muddy in other places I visit, like Bourne Wood.

A good while back, for a couple of years, I took out a parking season ticket. I seem to remember back then (over 10 years ago), the ticket started off about £20+ a year and was a no-brainer. Then I think they realised the value of it, and it went up to about £50. I considered it – it was still a good deal – but I decided I probably wouldn’t get my money’s worth out of it. Although I enjoyed the park, I probably only went there twice a month during spring and summer, and much less in winter.

The annual season is now £80, or £90, to include two other useful car parks nearby (Orton Mere and Thorpe Wood). But I am now (drum-roll) retired (taa-daaaaa!), and could happily drive down and spend time there a couple of days a week. £90 works out at £1.70 a week, which is less than a single hour’s parking there.

So given that I like the place, that there are countless different ways to walk around the place, plus access to two other areas, I decided that paying for the ticket would encourage me to go down there and use it, and get some regular exercise.

Although it is across the county border and in Peterborough, it is 30 minutes drive away, only 10 minutes further than Bourne Wood. So I think it is probably a good decision.

And a very nice addendum to that.

Having decided to buy the pass, I’d hit their website earlier in the week, and saw that there was no online application. It was a case of download a form, fill it out and send it back with a cheque.

Of course, it made me put the whole thing off. 😃

Downloading the form today, I saw it said it could be filled out and returned by email, after which you could either pay by card, over the phone, or by BACS payment.

So that is what I did. I sent them the form, and asked them for their bank details, expecting to hear back some time next week.

Within an hour, a reply saying “Thanks… here’s our bank details… let us know when you make the payment.” (I have paraphrased for brevity).

I made the payment and emailed back, telling them the banking reference I had used (my name and reg).

They emailed straight back thanking me again, and telling me:

I have to say, I’m pretty impressed.