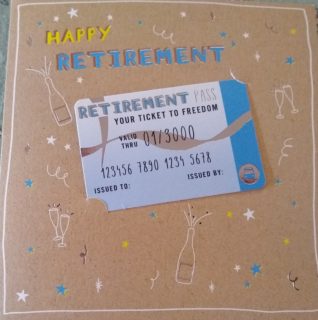 I retired in mid-February, so thought I would post how things are going.

The first couple of months of retirement saw me not doing that much at all – it was very easy to just laze about and not get around to getting things done. A lot of cooking and eating, TV and reading – particularly reading; I got through a couple of novels a week and made a good dent into my to-read list.

Although that isn’t a level of (in-)activity I’d be happy to continue, I think it was a useful pause – especially during the bad weather when getting out and about was impractical.

But I’m now getting my act together. I had gardeners in mid-May – mainly to lay a new lawn out front, but they did a couple of “heavy” jobs for me out back; laying more gravel, and emptying my veg troughs. In the couple of weeks since then, I’ve been getting stuff in the back done – I’m halfway through pressure washing the patio, and have determined 3 of the 4 troughs are still sturdy, while one needs major repairs, but I now know how I am going to do that.

I was making plans to get the troughs filled and get some planting done by now, but because of not getting on top of the repairs (and rearranging them – which is only possible while empty), I’ve decided to not worry about veg-growing in 2022. Instead, I’m not rushing anything, and just plan to be ready to plant next Spring, although I may plant one trough of over-winter vegs. More on that in Food Adventure

The conservatory has now ceased to be my office – it took me over a month to get around to it, but my computer station is now (temporarily) in the back of the living room, and the conservatory table has been cleared and moved against the wall. This leaves far more floorspace available, and means you aren’t squeezing past the end of the table when passing through the room. The only reason I had the table in that “cross-room” position was for working – otherwise morning sun through the fanlight windows would dazzle my laptop and monitor.

There is some further tidying to be done in the conservatory, but the idea is that now Katie has a dog-flap there, I can possibly try leaving her in the conservatory, with the door to the living room closed, when I go out; rather than putting her in her crate. She has plenty of space, water and access outside. I just need to make sure there is nothing chewable within her reach. She is not normally a chewy dog, but when left alone and bored…

Now that the table is cleared, I plan to get some good solo games out, and get involved in board gaming. Then, when I feel up to it (and the garden is straight again for the BBQ), I’ll get some single-game sessions organised again.

As the weather improves, I am also getting out more with Katie. I mentioned in April that I’d taken out a season ticket for parking at Ferry Meadows, and I am beginning to get my money’s worth.