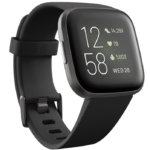 As part of measuring my activity, I decided to get myself a Fitbit again.

I had a basic Fitbit tracker (not a watch) several years ago, but gave up on them because of their unwillingness to cater for fat wrists. I then moved to Garmin, which was a success in terms of measuring my steps and sleep, the two main things I am interested in. But there wasn’t the same community, and after a couple of years, it was getting shabby, and I stopped using it.

But I did like the instant reassurance on my sleep measurements – which I can get out of my CPAP with greater accuracy, but it means unplugging cards, and finding adapters and such. What a faff. Being able to get up and just look at a dashboard is great.

So because Fitbit were having an Easter sale, so was Amazon, and I picked up a Versa 2 for £99 instead of £149. Not the latest watch, but it is one that I know is served by 3rd party extension wristbands (another 8 quid).
When it arrived, yesterday, I was surprised to find I could just about get it on with Fitbit’s larger strap. But it was tight, on the very last hole, and a fiddle to fasten as a result.

There’s the ability to add friends for sharing activity levels. I’m going to leave it a few weeks before I friend anyone, to let me get some legs under me first. Many of my friends are far more active than me.