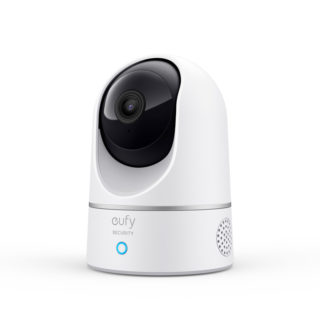 I have 3 cameras in my house, by Netvue. Two of them are up and down pan, in my lounge and kitchen, the third is fixed and installed in the lid of my dog’s crate. I use them mostly for checking up on Katie, usually when I am working out in the conservatory.

The lounge cam gets a lot of use – Katie generally be found on the lounge sofa, or on my recliner.

The kitchen camera lets me watch her when she disappears out there, and I am either working or watching TV – if I simply go out to watch her she will stop what she is doing, so it is more entertaining to keep tabs remotely.

The crate cam is the most useful, as I can check on her in the night, if I hear noises downstairs. I also sometimes use it first thing if I want a lie-in – I check on her and if she is still sleeping, I can grab another 10 minutes in bed.

So all three cameras work, but they work fairly badly. The constant buffering is bad enough, but sometimes you try to connect, only to be told that the camera is not responding. This is not an Alexa thing, as the Android app says the same thing. The only way to fix this is to go to the camera, power it off and power it back on. Which makes nonsense of them being remote cameras.

I am not the only one. The Netvue FB group is full of people complaining about the buffering, the not responding, and how the cameras seem to randomly destroy micro-SD cards, which can be used to record on.

So what has this got to do with Eufy? I came across Eufy a couple of months ago. They are doing a fairly well reviewed doorbell, like my Ring 2, but with a base station, so no need for a cloud subscription for recordings. It was interesting to read about, but I am invested in my Ring 2, it performs pretty well, and the cloud subscription isn’t much, and isn’t essential. I am thinking of doing away with the subscription, as most of my use is with Live feeds.

But Eufy also do little cameras, quite similar to my Netvue. I read the Amazon reviews, and they seemed decent, so I bought 3 – two pan-tilt and one fixed, to replace my old Netvue cameras.

They arrived today, and while better than the Netvue, they aren’t by much. Still buffering, also prone to freezing – both the app and Alexa feed. And when I view it via my Echo Show screen, it always starts with a loud repetitive beat (not feedback), and 50% of the time doesn’t load at all.

It was then I read reviews of the Android app and Alexa skill. While the device reviews on Amazon were very positive, the app and skills reviews are scathing.

Fortunately, I had the sense to only open one, so they are all going back, for a refund. I’ll make do with my Netvues, until I can find something better.