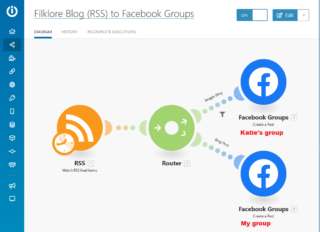 I recently set up new automations to post links to my blog posts (this blog, and Food Adventure) to their respective Facebook groups (Filklore, for general posts, Katie for beagle posts and Food Adventure for FA posts). I also set up a feed of any “gadgets” category posts to go to my Twitter feed.

I’d decided to do this in Integromat, which I find is the friendlier of the three sites I have used in the past. But for reasons I never got to the bottom of, I could not get either of their WordPress modules (current and legacy) to work properly. So instead, I am simply checking the RSS feed, which works like a dream. I am going to use RSS for all future integrations, where available, as it is easy and needs no login.

So it all worked, until today, when one of my routines stopped. It turned out that the Twitter module is a “Premium” module at Integromat. Twitter, really?

I had signed up for Premium for a month, as I have found before that developing these integrations can push through more traffic than their “free” level permit – it seemed a simple way to get my experimentation done without worrying about hitting the limit. But the amount of traffic I am actually moving each month, once it is set up is tiny, as are the number of activations (which Integromat also uses as a metric). Cross-posting is not urgent, as long as it happens, so I have it checking every couple of hours, rather than every 15 minutes (even empty sessions count!); so once I had everything working, I cancelled Premium.

Which is why it broke this morning, because my paid month ran out. I considered going back to Premium, but the cheapest paid option is $9 a month. I wouldn’t mind paying that if I was actually using the bandwidth it pays for, but just to enable a Twitter module, it’s a big nope.

Now, of course, Integromat can charge what they like. But if there had been an cheaper option to, say, use Premium modules, but otherwise keep the activations/data levels the same, I would have seriously considered it. $2-3 a month, I would have paid. I just think that going from free to $108 a year is a big leap.

So instead, I am sticking to their free plan, and have switched my Twitter feed to Zapier, which I had up and running within about 10 minutes. Zapier itself has (different) limitations on its free plan, and an even higher start point (£20 per month), but I’m not running anything on it at present, so I am well within the free usage.