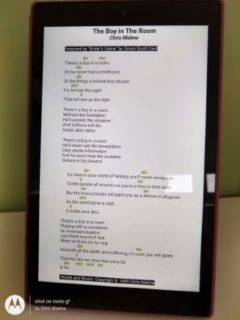 I replaced my old Nexus 10 tablet earlier this year with a new Fire HD10, which I am very happy with.

I use it as a general tablet, but the reason for going for a 10″ device is that it also doubles as my lyric/chord library using LinkeSOFT Songbook.

The new tablet is of slightly different dimensions to the Nexus 10; more widescreen, or – in the context of a songbook – longer and narrower. This actually works better for the lyrics, but I found that the Fire HD10 won’t fit my existing tablet stand. It is narrower than the smallest setting of the stand’s clamps, and longer than the largest setting.

So I was looking at other tablet stands, but they all seem to have one of two problems. Either they are like my existing stand, and potentially won’t fit (I don’t want to buy one to find out), or they are the kind that clamps diagonally, which would either interfere with my tablet’s on/off button or volume controls, which are both positioned near the corners of the device.

I decided to just get a music stand, and prop the the tablet up on it, but I hate those collapsing ones that I can never fold properly, and a big wide solid stand seems over the top for a 10″ tablet.

In the end, I bought this. It is small, the size of a single page, but plenty big enough for my tablet, and can clamp to a microphone stand, which is handy. It may also clamp to the upright of my old tablet stand, which would be handy for portability. 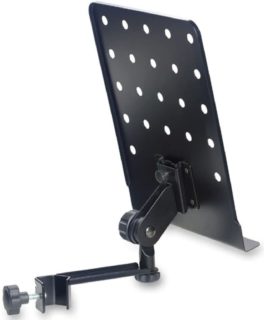 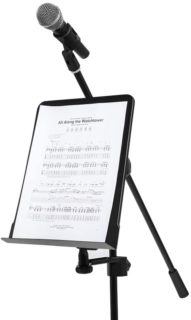